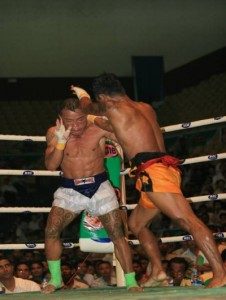 The “hard” version of the bando is better known as flyway or burmese boxing.

Lethway or Burmese boxing is a tough version of the bando. It is important to note that both the training technique and tactics, as well as the classification of bando techniques, contain the basic principle of “nine by nine”. This principle is that there are nine main lines of defense and attack in a bando; nine basic types of throws, deductions, captures; nine tricks that are aimed at breaking the opponent off the ground; nine basic ways to move; nine ways to hit with knees, fists and elbows; nine base blocks and nine kinds of kicks. And although such methods, in fact, there are much more, but they are all based on a foundation of nine bricks.

There is also a professional and amateur bando. In the case of professional wrestling, the training of students who have reached adolescence begins and proceeds according to the similar principle of training boxers in Thailand and sumo wrestlers in Japan. Bando can even be practiced by women. Since the technique of releasing and avoiding captures is a convenient form of self-defense.

In a traditional bando, the form consists of shorts or a loincloth and a langot, that is, a triangular belt that acts as a tread to protect the groin. So, during a fight, it is allowed to use it for a throw. There are cases when fighters are rubbed with oil, and ordinary protectors made of coconut shells are put on their feet and hands. In some American schools, where a modernized look of bando is practiced, they wear a black uniform to the color of the skin of the totem beast of a bando – a black panther. In bando, professional fighters can have tattoos depicting an animal on their body. At the time of the birth of the bandeau, a tattoo in the form of a beast informed that the soldier belonged to a specific unit of the Burmese army, but now it is believed that the beast depicted in the tattoo transfers part of its special strength and speed to the fighter. Even the very procedure of applying such a complex pattern to the body is quite painful and lengthy and serves as another way of cultivating the strength of mind and endurance of a soldier.

The bando traditions, through the centuries of their existence, carry a special system of ranks. So, it is believed that by highlighting one, you can offend many other fighters. Thus, the Americans, faced with the problem of hierarchy, created a system of dan in accordance with the experience of fighters. In order to receive his first dan, the student must be engaged in 5 years. After which, every next three years are awarded given up to the sixth. The following – the seventh, eighth and ninth respectively are awarded to a fighter with an interval of 10 years.

Bando is not and does not seek to be recognized as a professional sport. Most gang organizations are non-profit and do not resort to advertising their own school or their own fighting style.

In Europe, bandos are often referred to as Burmese karate, although these two types of martial arts have very little in common, but modern types of bando are somewhat similar to karate. Thus, the smooth and graceful movements inherent in traditional bando schools have more in common with the technique of Chinese internal schools than with the technique of karate. It is important to note that in the bando there are several “animal” fighting styles that mimic the movements of the viper, tiger, wild bird, deer, wild boar, scorpion, boa constrictor, panther, monkey, eagle, cobra and buffalo, which is also characteristic of Chinese martial arts.