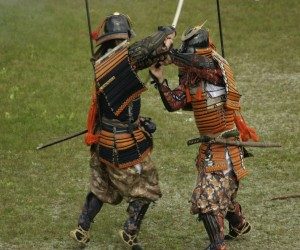 Kenjutsu is an ancient art of wielding a sword that arose about 1,200 years ago in ancient Japan in connection with the establishment of a class of warriors in society.

During kenjutsu training, fights between rivals are carried out using wooden bokken swords. Most often during training, kata are performed, in which various combat situations are laid. After several thousand repetitions of the kata, the technique of owning a sword was remembered by the body of a warrior at the level of reflexes, which gave him the opportunity to fight automatically.

In kenjutsu, they work with a sword that has already been pulled out of the scabbard, so the kenjutsu’s behavior is quite aggressive and demonstrates the strength of a warrior. The main weapon in kenjutsu is a large sword. After a fighter rises to a certain level, he can practice with a short sword and with two swords – long and short.

Kenjutsu is a martial art of a predominantly offensive nature. The first documented kenjutsu techniques date back to 800. Since that time, there have been more than 1,200 different schools documented.

The sword for the samurai was his soul. Fencers have developed the art of the sword so much that they made kenjutsu not only an effective military art, but also a way to purify the soul. Many kata were built to teach hidden techniques – these kata looked like a puzzle. The warrior was supposed to comprehend all the techniques only after repeated study of each kata for a long time.

Kenjutsu is a sword fencing. Kenjutsu is considered a classic art of warfare. Kenjutsu schools have always kept their techniques a secret from outsiders, which is why kata was developed. It is believed that many of the techniques have not reached our time, but much has remained preserved – only for the elite, to protect kenjutsu from unworthy training.

The most common way to study the necessary movements is kata – joint exercises. At first, the student trains alone, and only later – in pairs or with a large number of opponents.

Kenjutsu can be divided into fencing with a long sword, fencing with a short sword and fencing with two swords. Sword fencing appeared in the 10th century, and by the end of the 12th century canons of a number of fencing techniques were created for foot and horse warriors. However, the main weapon of the samurai of that time was a bow. Later, when the quality of the smelted swords improved and the number of archers decreased significantly, swords became the main weapon of the samurai – the art of fencing began to develop rapidly.

The first kenjutsu schools appeared at the end of the 14th century, and already at the end of the 15th – beginning of the 16th centuries four main kenjutsu schools were born. The preparation of the kenjutsu master consisted of teaching him the skills and techniques of opposing the enemy, using the sword and other weapons – halberds, spears, poles, and also fighting without weapons. The technique of fighting with swords was designed to fight with the enemy in armor and took into account their shortcomings. The blows were to be applied to the “slots” in the armor; the main targets of the lesion were the neck, trunk at the junction of the chest plate and hem, wrists, elbows from the inside, the inner surface of the thigh, and ankles. To prevent the sword from being damaged in battle, it was not substituted for blows, but different methods of evading enemy attacks were used.

Kenjutsu schools differed among themselves in stances and receptions, however, in each school there were few basic receptions – no more than 15. The general opinion was that with a qualitative study of this quantity, it is quite enough to win in any duel. Schools significantly differed from each other in their chosen tactics: some adhered to the offensive style, for others the main thing was the waiting style.

To hone their skills, the fighters performed paired kata with fixed movements of both participants practicing with wooden swords. The quality of training was checked in competition fights, where blows were made, stopping the sword a few centimeters from the enemy, as well as in duels with military weapons.

Since the Tokugawa era, kenjutsu has gradually lost its practical meaning. Most of the schools of this time mainly studied not methods, but ways to achieve a state of “thoughtlessness”, using fencing as mobile meditation, a means of educating the mind and body.

After the Meiji era revolution, kenjutsu sharply lost popularity, many schools were closed.