Your martial art and its realismWhen we talk about a fight in the original sense of the word, we do not begin to talk about certain organizations or tournaments, but, first of all, we mean… 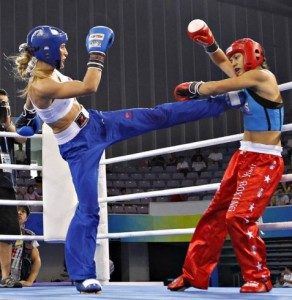 Kickboxing has incorporated all the best from such schools as English and Thai boxes, Wushu, Taekwondo and karate. All this requires from the participant of the battle not only excellent physical, but also psychological preparation, since the battles are held in full contact. You can hit the head and body in full force with your hands and feet.

rules
At the dawn of kickboxing, there was one rule so popular in Hollywood action movies – no rules. It was possible to do sweeps and grabs, steps and throws, as well as use any kicks and arms. But over time, the rules were clearly formed. The rule of 8 strokes appeared. It implied that in a round 8 or more kicks had to be inflicted with the feet. This added to the entertainment of the battle, while before him, kicks were often not used. This rule is currently changed to 6 strokes. In this case, knees and elbows, holding and throwing are prohibited.

The largest kickboxing organization for amateurs and professionals, the World Organization of Kickboxing Organizations brings together participants from 89 countries under its wing.

For fans, European and World Championships are held every two years. Selection takes place according to the Olympic system. Professionals do not have a strict time frame for championships. The title of a fighter depends on the number of rating fights held by him and victories in them. Those who scored the highest rating in their weight category become a contender for the champion title. Next, the applicant fights with the current champion and in case of victory becomes the world champion according to the version conducting the organization’s championship.

Equipment is required for amateur kickboxing. Professionals without fail use mouth guards, inguinal shells and gloves. Perhaps the use of protection for the legs, with the mutual consent of the participants in the meeting.

The fight
Fights are held in the boxing ring. For amateurs, these are 3 two-minute rounds, for professionals they spend from 6 to 8 rounds also lasting two minutes. The fight for the champion title usually lasts 12 rounds. Like in boxing. Men come out with a naked torso and in shorts, girls in shorts and a T-shirt.

Kickboxing Kinds
Kickboxing has three varieties, all of them differ slightly from each other by the rules:

– Japanese kickboxing (K-1) – the most popular to date

K-1 kickboxingThis martial arts team is managed and promoted by the Fighting and Entertainment Group. They are the organizers of various fights around the world. First, regional tournaments are held where the best fighters are selected. Further, the best fighters meet in the ring of the annual K-1 World Grand Prix tournament. This sport is very popular in European countries, Korea and Japan and is gaining great popularity in Russia. In most states of the USA, K-1 fights are prohibited, mainly such battles are held in Honolulu or Las Vegas.

K-1 is kickboxing, where it is impossible to draw a clear line between sport and sight. It is believed that K-1 is a very tough and cruel sport, but it is not. In fact, there are enough rules that limit the tricks that fighters can use.

The K-1 fight is three rounds of three minutes. The tournament must reach some final point, be it a knockout, a technical knockout, a decision, a disqualification or a draw. Only a doctor or referee has the right to stop a fight.

Three judges judge the battle, who evaluate the movements and blows of the participants using the ten-point system. If three rounds end in a draw, the referee appoints an extra round, the fourth decisive round. In this case, the judge is judged only by an extra round of combat.

BoxingBoxing is a type of martial arts where athletes use fist punches with the help of special gloves. The game has a referee who controls the fight. The fight lasts…