IaidoIaido is a special art of unexpected abrupt attack or counterattack with the use of the Japanese Katan sword. Iaido does not study sword fencing, but only instant killing an… 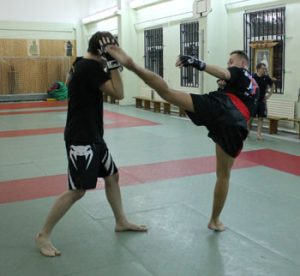 From an applied point of view, martial arts focused on hard contact are most effective. In the countries of the former USSR boxing, kickboxing, Thai boxing, combat sambo are widespread, kudo, wushu sandu, army hand-to-hand fighting are quickly gaining popularity. At the same time, in all forms, there is a tendency towards a certain simplification of technique due to work with legs. Less and less often, one can see kicks not only in the head, but also in the body. The technique of working at long and medium distances is reduced to working with hands plus a low kick. What is the reason for this? Firstly, in most popular systems they work barefoot. An unprotected foot is easily injured, and the impact stiffness is significantly lost. Secondly, combat sambo representatives, who successfully perform in the mix fight and put more on the fight, have a great influence on the practitioners. Many fighters who prefer to work with their hands more often believe that “high” kicks are easily caught and cannot be used against a serious opponent. This opinion is widespread and has some basis. However, refusing to work with legs at various levels, we voluntarily refuse a very large part of the effective arsenal of techniques both in attack and in defensive actions. So one of the most effective technical actions in an attack is a kick to the body from under the arm, and in defense – a kick to the body under the attacking front hand.

Oblique kick
Work with one hand, however, as well as with one foot, in principle, is possible. However, for the greatest effectiveness in combinations of blows, work with arms and legs needs to be combined. The easiest in terms of compatibility with hands is an oblique kick (dolio-chagi, mawashi-gary, high / middle kick, round kick …). It is conditionally possible to determine two types of a given strike: “click” and with a carry. A “click” strike is characterized by a sharp jerking of the leg immediately after application; when struck with a carry, the leg does not jerk, but sweeps through the target as much as possible. A blow with a carry has a greater destructive force, a “click” is also applied with a turn of the pelvis and is also a strong blow. A “click” hit is sharper, after which the attack can be continued by blows with arms, legs or knees. A blow with a carry is usually carried out at the end of the ligament or when the enemy opens and does not protect the hull with his forearms. A sharp “click” is usually carried out from under the arm or when the opponent is open for a blow to the head. With the right and timely “click”, it is very difficult to catch a foot on a grab, especially when hit in the head.

Direct and side kicks
The direct (up-chagi, mae-geri, front-kick) and side kicks (yop-chagi, yoko-geri, side-kick) are completely ignored by many fighters. But in vain, with the help of these strikes, you can successfully attack the enemy’s corps, strike in the opposite direction under the attacking hand. It is these attacks that allow you to keep the enemy at a distance, to meet him at a safe distance. In the attack, they often allow you to get the enemy, “running away” from punches. In attacking actions, these attacks are usually used in ligaments after the enemy is forced to raise his hands to protect his head, or in another case when the enemy has opened to strike.

Low kick
Many fighters use this blow solely to “flatter” the hail of punches. Meanwhile, this blow deserves separate consideration. Some fighters use it as jab boxers, meeting and destroying enemy attacks. Low can be used to enter a short range and to clinch with the continuation of knees. In addition, a low can be indicated by breaking another kick, for example, a side kick to the body or a back kick to the head. Also, when the opponent takes out a knee to protect against your low, you can hook it with your ankle and, having slightly rotated around its axis, get a great opportunity to attack.

U-kicks
They say they are complex and relate more to dancing than to real combat. I do not agree. Firstly, and this is the main argument, these attacks are used in a battle against a group, when one of the opponents can go behind you. Secondly, reversal strikes are unexpected, if you like, they are unnatural for the body and the enemy often does not have time to react to them. If you meet the side impact from a turn, it is quite possible to get a knockout through the forearms that protect the body. Sometimes a U-turn strike will be the shortest and fastest continuation of the attack.